Skip to content
Hit enter to search or esc to close
Home  >  Hotels & Hotel Hacks  >  Tipping in Hotels: How Much Should I Tip in Hotels in 2021?

Traveling to new countries introduces us to new customs. One of the customs that varies from country to country is the tipping culture. One of the places I’ve always found confusing when it comes to tipping is in hotels. In this post, we will discuss tipping in hotels and how much to tip each staff member.

Tipping in Hotels: Not All Staff is Tipped Equally

Tipping in hotels, especially the high end hotels, is a nice way to show your appreciation to the staff. Consider that in less developed countries, hotel staff probably earns only a few hundred dollars a month. Hence, imagine the impact of receiving an extra few dollars from each guest you’ve helped.

How much should I tip in hotels?

If you are wondering how much to budget for tipping in hotels, here is a recommendation of how much to tip each staff member.

Don’t be cheap with tipping. Instead, save money on the hotel you ALREADY booked.

Let’s start with the hotel service we all use, housekeeping! Consider leaving between $2-$5 per night. If you are a large group in one room, or if you are particularly messy, consider leaving a bit more. Since the same housekeeper will not necessarily clean your room each day, make sure to tip daily. When leaving the tip, make sure to mark it clearly, using words like “Housekeeping Tip” or something similar. There are very strict rules regarding maids taking belongings from rooms, so it´s important to clarify that you purposely left money for them.

If you hop on an airport shuttle to your hotel, you can either tip the driver based on distance driven or per bag. For short distances, consider $2 per person. Subsequently, for longer distances, $4-$5 is the more adequate amount. If the driver helps with heavy luggage, consider tipping them between $1-$2 per bag.

Typically speaking, tipping hotel valet parking can vary between $1-$5. Do not give them leftover change, as it is considered to be rude. Furthermore, if you request their services on a day with bad weather, consider tipping closer to $5.

For basic information or requesting directions for instance, no tip is necessary. However, if you plan on using the hotel concierge to book multiple activities for you, consider leaving between $5 to $20. It’s up to you if you prefer to pay one lump sum upon departure, or in your daily interactions with the concierge.

Tipping in Hotels: How much to tip the Doorman and Bellhop?

Once you arrive at your hotel, if a nice doorman greets you and helps with your bags, feel free to tip them between $1-$2 per bag. If they help you and quickly get you in your taxi and on your way, consider tipping an additional $1 to $2 for their effort.

If you request a bellhop to help bring your luggage to your room, leave them a tip between $1-$2 per bag . The same applies if the bellhop stores your luggage prior to checking in. By the way, if you think about asking to borrow the cart and save a few bucks, that is a big no-no and is perceived as extremely rude.

40% chance you overpaid for your hotel. Here is what you can do about it.

Should I Tip Room Service and the Barman?

It depends. If gratuity is included, then you don’t need to tip. If not, then consider tipping 15%-20% of the bill (this can vary based on the recommended tipping percentage per country).

When sitting at the hotel bar, leave between $1-$2 per drink, depending on how elaborate the cocktail is.

In Which Countries is Tipping Not Expected?

Although tipping in hotels it is not expected in these countries, it is very well appreciated by hotel staff. In Japan and China, for example, tipping can be considered rude. However in other countries, especially in restaurants, the bill will include a service fee. Whether included or not, rounding up the bill is a common practice and is appreciated. Here is a list of countries where tipping is not expected:

That said, when in doubt – tip!

If you are traveling for more than a week and/or you are bringing along the entire family, tipping in hotels is expected and worth taking into consideration when budgeting for your trip.

Lastly, a few dollars here and there can quickly add up. That said, rest assured your non-taxable contribution is helping to make a considerable impact in the hotel staffs´ financial well-being!

Hotel Beds: Which Chain Has the Best Beds?

Hotels with Waterparks Around the World

What Are Resort Fees (And How To Avoid Paying Them)

For those who want to workout while traveling, a great hotel gym can make all the 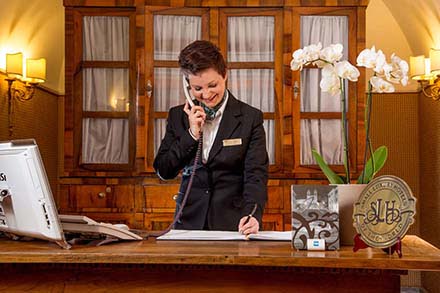 Save Money on Your Existing Reservations By Sending 1 Email Hotel Concierge: Overcoming Language Barriers In