Seoul is the capital city of South Korea. It houses nearly 12 million residents. Sudogwon (or the larger Seoul Area) is home to nearly 26 million people. As one of the world’s largest metropolitan areas, one can imagine that there is much to do in Seoul. That would be a correct assumption. Over the next 200 words or so we hope to give you a sneak peek into what is in store for you in Seoul. But we won’t stop there, we want to help you see Seoul for cheap! This post is made possible by @thepoortraveller.

The first thing to note is the Airports. There are two main airports going to Seoul. Incheon (ICN) and Gimpo (GMP). GMP is the Airport mainly used for international flights and is the primary airport in South Korea. That all being said if you’re coming into Korea from South-East Asia than ICN will actually often have better rates.

Once you arrive in Seoul there are few options for you in terms of transportation. There is the Airport Railroad Express (AREX). It is by far the fastest way and it costs a little over $13 USD. The AREX All Stop Train, on the other hand, takes a little longer but only costs around the $4 USD mark.

There are so many things to do and see in Seoul for cheap. We highly recommend going and enjoying the city, and we understand some people need to travel on a budget. Hence why we are sharing this article. 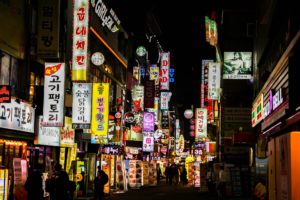